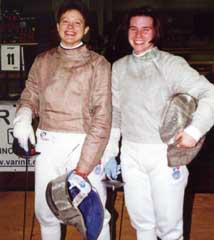 Fencing is one of the original sports of the modern Olympic Games, with roots in European swordplay. Foil, epee and sabre are the three swords used in the sport of fencing. Foil and epee are point-thrusting weapons. Sabre is a point-thrusting as well as a cutting weapon. The target areas differ for the three weapons, although all three are scored electrically. While it is not unusual for fencers to compete in all three events, they generally choose to develop their skills in one weapon. Until recently, women were permitted to compete only in foil and epee, but now the national and international governing bodies offer competitions for women in sabre. This addition proved to be a good one for the United States, as our 2004 and 2008 Olympic Fencing Gold Medalist was in the Women’s Sabre event. Here is a short video on a fundamental of fencing, footwork:

Fencing is a sport for people of ages 7 and older. It encourages balance, coordination, and quick reflexes. It can be a sport for the serious competitior, or for the recreational fencer who has always dreamed of being a swashbuckler. If you have the desire to test your competitive urges, fencing offers plenty of opportunities.

For young adults, it’s important to know that many top colleges offer fencing scholarships for their NCAA athletes.

Older fencers benefit from an increase in core strength and overall muscle tone that the fencing workout provides. They also enjoy the mental as well as physical workout that fencing offers an athlete. Most importantly, fencing is a great stress reliever!